Bro, It’s About the Power-Part One 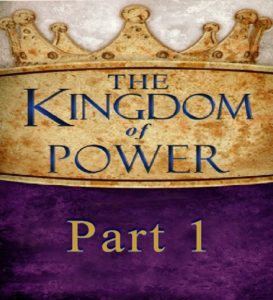 Satan wanted to see if Jesus would fall into his trap…

Luke 4: 5-6 The devil led Him (Jesus) up to a high place and showed him in an instant all the kingdoms of the world.

“I will give you all their authority (Exousia-Greek) and splendor, for it has been given to me, and I can give it to anyone I want to.  So if you worship me, it will all be yours.”

Jesus did not argue with his claim of  ‘authority’ to the kingdoms of this world. If Jesus worshiped Satan then Jesus would be Satan’s subject or under his ‘authority’. Although Satan would have a new primary commander of the world, both Jesus and the kingdoms of this world would be under his authority.  Gods promise to have the Son of man ‘crush him’ would be doomed-see below Gen. 3:14-15.

As with almost all temptations, Satan has to offer an attractive truth before the lie.

First, the truth.    The kingdoms of the world were indeed given to Satan 1 John 5:19, 2 Cor. 4:4-6.    That is, all the kingdoms not willing to serve Jehovah, the One true God  Psalms 33:10-22.   There is no middle ground with God.  A person, city and nation will serve Jehovah and be blessed, or fall into Satan’s authority or dominion and be cursed Deut. 28.   The tragic news is, mans kingdoms as a whole are under Satan’s curse and authority. From the time man fell to sin in the garden of Eden God issued a decree that the cross of Christ is the only remedy for man and society.  Jesus declares the same.

Gen. 3:14-15 So the LORD God said to the serpent (Satan)… And I will put enmity (an enemy) between you and the woman, and between your offspring and hers; he (Jesus) will crush your head, and you will strike his heel (the cross).”

John 12: 31-33 Jesus said Now is the time for judgment on this world; now the prince of this world (Satan) will be driven out. But I, when I am lifted up from the earth, will draw all men to myself.”   He said this to show the kind of death he was going to die.

COL 2:15 And having disarmed the powers and authorities (Satan), he made a public spectacle of them, triumphing over them by the cross Also Gal. 1:4 .

Satan’s attempt to trap Jesus would start with the truth.  Before the cross, Satan did have authority of the kingdoms of this world and he could delegate this authority to whomever he pleased.  He wanted to convince Jesus He could avoid the cross-save Himself- and still rule (under subjection to Satan) the kingdoms He came to restore.  Satan thought Jesus could be deceived into thinking He could fulfill His Fathers task of ruling over the earthly kingdoms without having to commit to the cross-avoid God’s wrath due to mans sins.

(Rule without the need to restore a heavenly righteousness)

In simple terms, Satan’s ‘deal’  was-You can have what you came to save-the world and their kingdoms without going to the cross-without receiving the wrath from the Father whom You love.     Simply worship me and and spare yourself from Your Fathers wrath!

Now, the lies.   We as believers know God will judge sin because He is just and righteous. Without the cross, all mankind is held accountable for their sin.

COL 1:20 and through him (Jesus) to reconcile to himself all things, whether things on earth or things in heaven, by making peace through his blood, shed on the cross.

Romans 3:23 for all have sinned and fall short of the glory of God,

Satan’s authority is temporal. The Lord decreed His plan from the time sin was found in the paradise of God. The women’s son will one day crush Satan by the cross and resurrection of Jesus   1 Cor. 15:20-23.

Jesus never bought the lie.  In His weakness from fasting 40 days He reached out and used the sword from God, His Word.

Luke 4:8 Jesus answered, “It is written: `Worship the Lord your God and serve him only.’ “  Praise God.

Gods Plan To Unite The Earthly Kingdoms With His Heavenly Kingdom

Matt 6:9-10`Our Father in heaven, hallowed be your name, your kingdom come, your will be done on earth as it is in heaven.

Ephesians 1:9-10 And he made known to us the mystery of his will…to bring all things in heaven and on earth together under one head, even Christ.

Some of you may have noticed Satan did not use the word power (Dunamis –Greek, English- dynamite) when he claimed he had the ability to govern kingdoms of darkness.

Luke 4:6 “I will give you all their authority (exousia-Greek) and splendor, for it has been given to me, and I can give it to anyone I want to.

We already know Satan is more powerful than man (and their kingdoms).  Mark 5:4, Acts 19:16, 1 Peter 5:8.  Why then did he use the term AUTHORITY (exousia).  It is the same reason Jesus gave AUTHORITY (exousia) when He commissioned His disciples to defeat the devil and the curses from sin.

Matt. 10:1  He called his twelve disciples to him and gave them authority (exousia)  to drive out evil spirits and to heal every disease and sickness.

Mark 3:14-15 He appointed twelve–designating them apostles–that they might be with him and that he might send them out to preach and to have authority (exousia) to drive out demons.

Absolute sovereignty and infinite power (God) has authority over limited power (Satan)-thus God has authority over Satan. God is also completely righteousness. He cannot rule over a sinful kingdom without judgment  Ezekiel 14:12-20, 2 Tim. 2:13. Therefore, Satan was indeed given for an ‘age’ the sovereignty of the world’s kingdoms.

A Christian with inferior capabilities however will always have an ‘uphill’ battle attempting to fight Satan’s power (dunamis) verses power (dunamis).  If, however, believers were given God’s authority-exousia, than we can command Satan’s power to be cut off and Gods power to reign for a given prayer or need. That spells VICTORY!

Bro’s…it’s time to get excited!! Oh yes, sisters are included!!

1)  Are we positioned with Christ at the Fathers side?  Here are two verses that we could never be able to express our gratitude because of His grace, even though we will have eternity to do so..

Ephesians  2:6 And God raised us up with Christ and seated us with him in the heavenly realms in Christ Jesus,

Ephesians 1:3 Praise be to the God and Father of our Lord Jesus Christ, who has blessed us in the heavenly realms with every spiritual blessing in Christ.

Plain and simple.  Saints are given the authority in Christ when He was raised from the dead and seated on Gods throne.

Ephesians 1:20-21 which he exerted in Christ when he raised him from the dead and seated him at his right hand in the heavenly realms,
far above all rule and authority, power and dominion, and every title that can be given, not only in the present age but also in the one to come.

Since we are ‘positioned with Christ’ (and have His keys to the heavenly throne), we have His authority-what a beautiful and humbling truth!  The Lord promises we can start to bind Satan’s powers on earth and the devils ‘higher’ powers will start to be bound by Gods heavenly powers-His holy angels Rev. 12:7-11.  It goes the same for loosening Satan’s strongholds. More detail will be given in later articles, but Satan has attempted to copy the Lords power structure (Col. 1:16,  Ephesians 6:12).  The devil appears to use a ‘pyramid’ base, similar to a military structure in an army. It is highly effective in function and power.  The Lord is explaining when we defeat his lower power base on earth with the authority we have ‘in Him’, Satan’s rule over the kingdoms will cease and he will fall as explained in Rev. 12:7-11.   A kingdom divided cannot stand- Mark 3:23-27  If a kingdom is divided against itself, that kingdom cannot stand.  See  Mark 3:23-27, Matt. 24:14, Matt. 11:12,  Ephesians 4:11-13,  Eph. 6:12.

The exciting news is we can have success now.  When Jesus sent the 12 apostles out preaching the kingdom of God, the above authority and powers automatically ‘kicked in’.

Luke 9:1  When Jesus had called the Twelve together, he gave them power and authority to drive out all demons and to cure diseases, [2]  and he sent them out to preach the kingdom of God and to heal the sick.  (Now the church-His body-has the same authority that Jesus gave the apostles-above verses Ephesians 1:3, 20-21, 2:6).

When He sent out the 72 by ‘regions’(Luke 10) I believe Jesus was sending us a message. He called the 72, those with ‘hearts like children’ or the ‘least of these’. They were not all apostles or with ‘special’ abilities. He sent them out by regions, town by town, area by area. He told them they would also have the powers of the Kingdom of God, the heavens would open and they were to heal the sick and have authority over the devil.  In other words, the entire church is to go out and preach the kingdom of God.

Matt. 6: 33 But seek first his kingdom and his righteousness,

Because we have Gods authority the heavens will open with His power over Satan kingdoms.   As stated in Matt. 16: 19,  with the ‘keys’ to Gods kingdom we attack the devils realm on earth, region by region (see the 72 below). The church attacks on earth and God takes care of the Satanic forces above the earth  Rev. 12:11, Rev. 12:9.

The gospel of the kingdom of God will be preached as a testimony to all nations-and then the end will come Matt 24:14, Satan falls and Gods kingdom power will hit the earth.

REV 12:10 Then I heard a loud voice in heaven say: “Now have come the salvation and the power and the kingdom of our God, and the authority of his Christ. For the accuser of our brothers, who accuses them before our God day and night, has been hurled down.
REV 12:11 They overcame him by the blood of the Lamb and by the word of their testimony; they did not love their lives so much as to shrink from death.

Beloved, the more we fight the more our loved ones will come to His truth 2 Cor. 4:4-6.  It is time to leave our segregation of denominations and personal ministries and come together and fight!

Simply ‘turn on the tap’ of Gods kingdom.  Pursue it, preach it and proclaim Gods kingdom.  The Lord says preach the Kingdom of God and I will soon follow! Luke 10:1

Luke 10:1-21 After this the Lord appointed seventy-two others and sent them two by two ahead of him to every town and place where he was about to go….
Heal the sick who are there and tell them, `The kingdom of God is near you.’….
The seventy-two returned with joy and said, “Lord, even the demons submit to us in your name.”
He replied, “I saw Satan fall like lightning from heaven.I have given you authority to trample on snakes and scorpions and to overcome all the power of the enemy; nothing will harm you.
However, do not rejoice that the spirits submit to you, but rejoice that your names are written in heaven.”

At that time Jesus, full of joy through the Holy Spirit, said, “I praise you, Father, Lord of heaven and earth, because you have hidden these things from the wise and learned, and revealed them to little children. Yes, Father, for this was your good pleasure.

Please be in prayer that God’s light will go forth within His church to pursue this truth.

God bless you all for making the effort to study His Word and search His truth.

This entry was posted in Uncategorized. Bookmark the permalink.